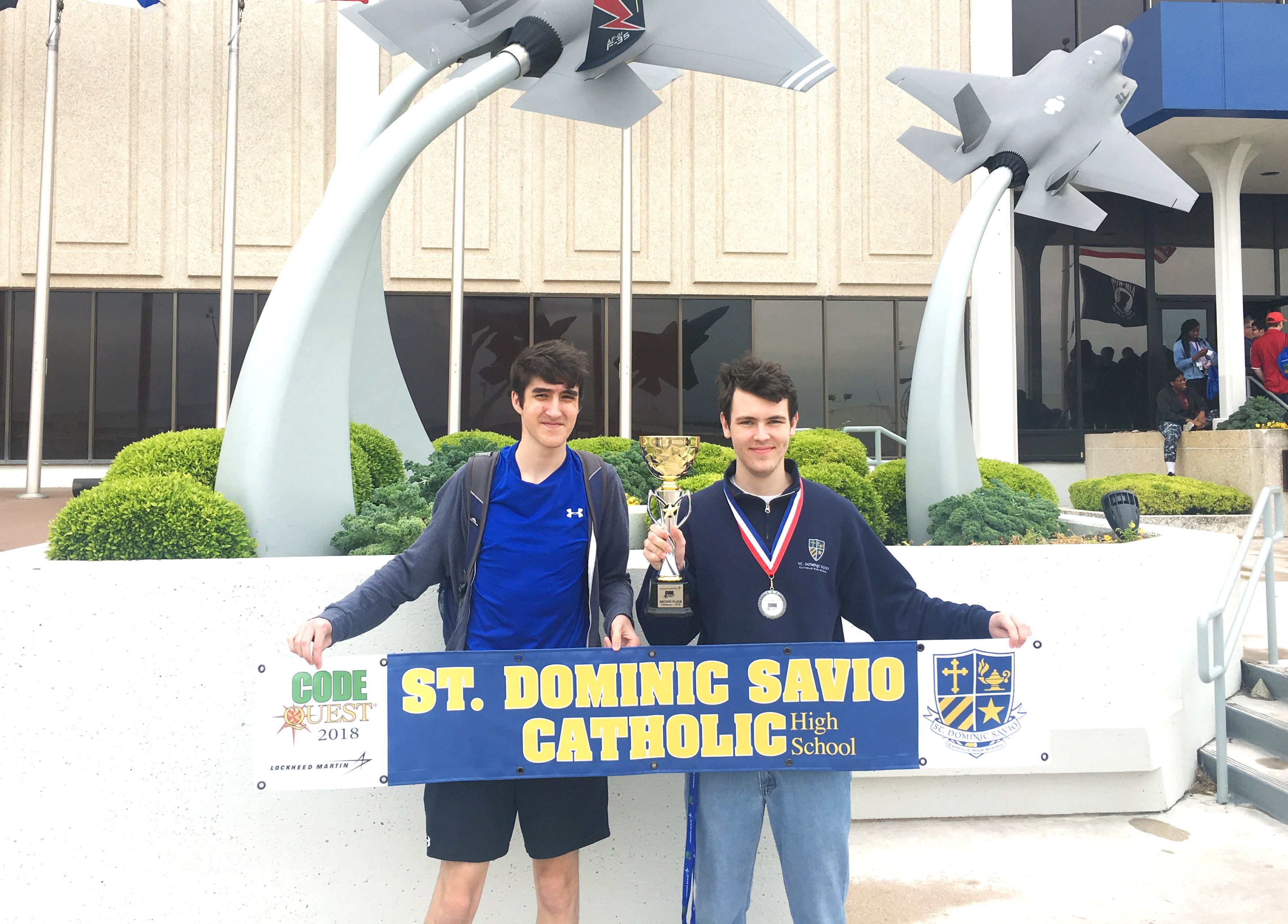 Our competitive programming team ended 2018 with several great performances in a few enormous meets.  Juniors Brandon Boettcher and Jonathan Shoemaker traveled around the state to compete.  First came the UT Dallas, Battle of the Brains, on April 7th.  This tournament is generally thought to offer the toughest problems of any tournament,  Savio was in the lead most of the day, only to get sniped at the end while winning the 2nd place trophy.  117 total teams competed, including all the top Texas teams.  Savio lost out to Plano West, but beat many of the top 6A schools in the state.

Next up was the Lockheed-Martin Codequest.  This tournament was held simultaneously at 18 international locations.  Over 1500 students competed in what is generally considered the biggest single tournament of the year. Teams had to solve 19 problems in two and half hours.  Among all ~600 teams, only four managed to run the table and Savio was one of those four.  The tiebreaker came down to incorrect submissions, and Savio had 3 compared to Richardson High School's 2, so we earned the second place trophy at the Fort Worth facility.  However, Savio is receiving an additional award for being one of the top teams in this region of the country. The tournament itself provided a lot of free Lockheed-Martin gear, and the teams were given an impressive tour of the F-35 fighters being built in Fort Worth.

Finally, junior Jonathan Shoemaker was named a USACO finalist. USACO (USA Computing Olympiad) is one of five big academic Olympiads, in which students compete to represent the United States at an International Olympiad competition held in a different location every year.  Only the top four high school students get to represent the country, with every major country (over 80) sending a team to the competition. The United States generally finishes among the top few teams.  Each year the top 26 high school students are identified as USACO finalists through a series of competitions, and earn a free trip to the USACO training camp held at Clemson University.  14 students (called Guernseys) attend a series of lectures given by various professors on advanced techniques.  12 students (called Holsteins) are considered in contention for the top 4 spots. Last year Jonathan attended as a Guernsey, but this year he comes in with the #7 Holstein ranking hoping to crack the top 4.  All scores from the year are erased, and students compete in seven consecutive days of five hour tournaments to determine the top 4, starting on May 24.  This year's International Tournament (IOI) will be held in Tokyo while next year's will be in Azerbaijan.

This ends a great year of Savio Programming! Savio is looking for the next great team to emerge, if you are interested to join the team, please contact Savio parent, Dr. David Shoemaker, drshoema@alum.mit.edu.