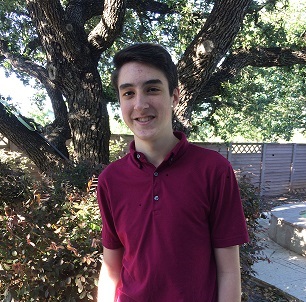 Every year thousands of top students from around the country compete in the United States of America Computing Olympiad (USACO), thought to be the top computer science competition available to high school students.   Through a series of four competitions, students try to advance from bronze, to silver, to gold, and ultimately to the platinum level by solving complicated programming problems within a fixed amount of time.  Among all students competing at the platinum level, the USACO leaders pick 26 students to win an all-expense paid trip for an intensive 10-day computer science training held at Clemson University.  This year Savio sophomore Jonathan Shoemaker qualified as one of these finalists and gets to attend the camp in late May.  Jonathan was the only student chosen in the greater Austin area, and one of five students chosen in Texas - generally thought to be the second toughest state in which to compete.

At the camp, there will be another series of competitions from which the top four students will be selected to represent the United States in an elite international computer science contest known as the International Olympiad in Informatics (IOI).  The United States is generally among the very top teams at the competition which usually sees over 100 countries compete.  This year's competition will be held in Iran, while the next two years are in Tokyo and Azerbaijan, respectively.