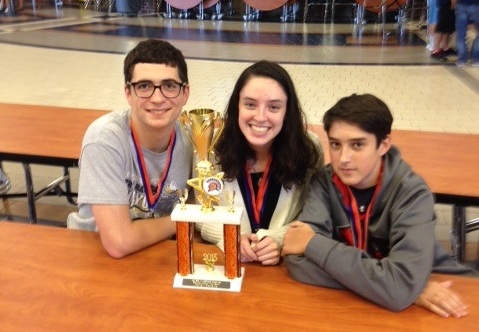 The St. Dominic Savio Computer Science Team entered their first tournament this weekend at Seven Lakes High School in Katy, Texas. Over 300 students attended the competition.   Savio was entered in the Novice Division for teams with one or less years of computer science class experience.   A total of 53 teams were entered in this division.  The competition consisted of two parts.  All 159 students took a written exam covering a variety of topics, and then each team of three had 2 hours to solve 18 problems using a single computer running Java.  The top 6 teams were awarded trophies while 7-12 were awarded ribbons.

When the dust settled, the team of Matthew Bianchi, Emily Shoemaker, and Jonathan Shoemaker had finished in 5th place, one problem away from 2nd place, and two problems from winning the whole thing.   In addition, the team won individual awards for placing highly in the written contest (Jonathan – 6th, Emily -8th, Matthew 13th).  The fifth place showing earned Savio its first computer science trophy for the trophy case.