It's All Savio at National History Bowl Qualifier 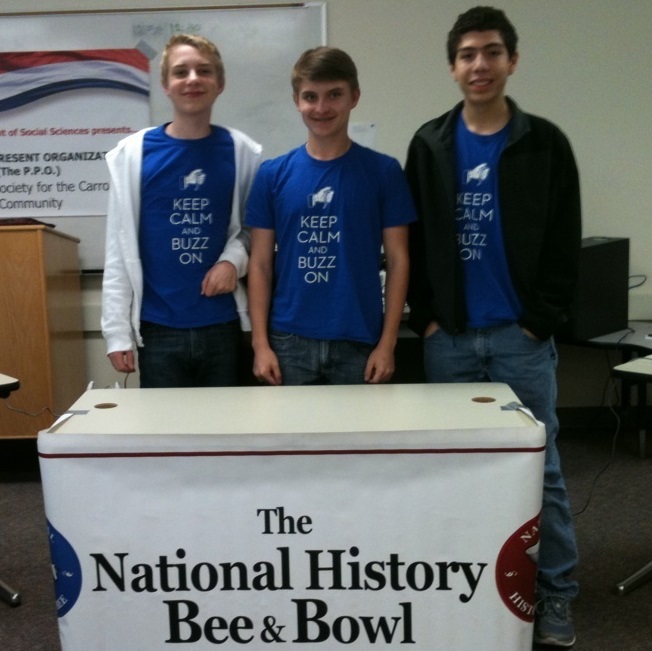 The Savio Quiz Bowl team competed in a regional qualifier for the National History Bowl at Carrollton Christian Academy on Saturday, Feburary 21st. Like at the Science Bowl two weeks ago, the Eagles played with a short-handed roster. But the team of Eleazar Camez, Daniel Jilek and Patrick Lahey had firepower to spare.

They cruised thru the preliminary rounds with an undefeated 4-0 record. Their victories over Riverdale Academy, Carrollton Christian Academy and the A & B teams of Allen High School came by an average score of 330-117. As the only team without a loss in the prelims, the Eagles took the #1 seed for the playoff round. Their toughest prelim match was against the Allen B team.

Savio faced the Allen B team in the first round of the playoffs, and they again gave the Eagles a good fight, taking a 60-20 lead in the first quarter. Savio closed the gap to 80-60 in the second quarter and seized control in quarter three, the lightning round. Savio put up 90 points to only 20 from Allen B to make the score 150-100 going into the fourth quarter. Savio prevailed 180-150 to advance to the tournament final.

Their final opponent was Selwyn College Prep. Selwyn never seriously challenged as the Eagles led from start to finish, taking the title match by a score of 300-100. This victory qualifies the Savio team for the National History Bowl championship tournament, which will be held in Washington, DC on the weekend of April 25th & 26th. The Savio team will face qualifiers from 96 other regional tournaments. Last year's event drew 132 teams, and this year's tournament is expected to exceed that.

The Carrollton event also served as a qualifier for several individual competitions as well. Patrick Lahey took first place in the Varsity division of the National History Bee qualifier. Eleazar Camez and Daniel Jilek were the final two competitors in the JV division. Eleazar managed to beat Daniel to win the JV division. All three of these players are qualified for the national bee events at the same site in DC in April.

There were also individual written tests at the event. Patrick Lahey took second place in the Varsity division of the US Geography Olympiad, and Daniel took first place in the JV division. Lastly, Eleazar took first place in the written exam for the US History Bee. All three Eagles will continue in April in these events as well. It was truly a big day in the DFW area for the Savio Quiz Bowlers!