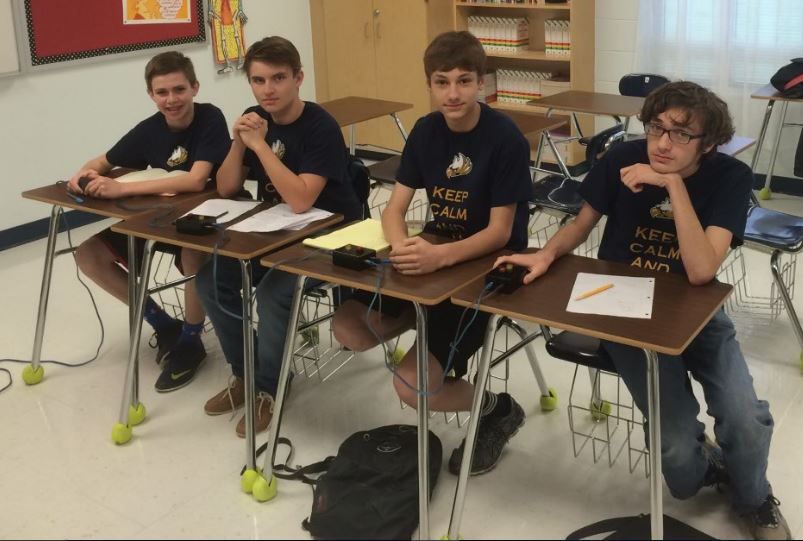 The Eagle Quiz Bowl team sent Patrick Lahey, Jack Frey, Nicholas Huth and Matthew Meskill to Brandeis High School in San Antonio for the Bronco Bowl on Saturday November 14th. Team captain Patrick Lahey was the only member of the team with significant experience at the varsity level, so when the team was placed in the upper division of the tournament the Eagles knew they likely were fighting long odds to go deep in the tournament. There were three teams from national power LASA, and, as luck would have it, the Eagles faced all three LASA teams in the preliminary rounds.

In the first three rounds the Eagles faced LASA B, LASA C and Keystone High School. The Eagles suffered lopsided losses against the two LASA teams and came up just a bit short against Keystone by a score of 275-230. The 0-3 start had the Eagles feeling down, but their fortune changed in their fourth match against Flour Bluff A. In another hotly contested match the Eagles managed to hold off a late rally and prevailed by a score of 220-200. The Eagles led from wire to wire in their fifth match, blowing out Flour Bluff B 290-10.

The Eagles then entered their final match of the preliminaries against the LASA D team. Earlier in the day LASA D was the subject of conversation as they had beaten the LASA B team in their preliminary round matchup. The early stages of the match went badly for the Eagles as they fell behind 65 to -5 after toss-up #3. By toss-up #6 the LASA lead had grown to 125-10, and at toss-up #8 the Eagles found themselves trailing 160-20. Matthew Meskill powered tossup #9, and the Eagles swept all 30 points on the bonus to make the score 160-65 before LASA grabbed the last toss-up of the first half to make it 180-65 at the midway point.

Patrick Lahey got the Eagles on the board on a question about Cleopatra, but the Eagles missed all the bonus points. The LASA team uncharacteristically negged on toss-ups #13 and #15, and the Savio team took advantage. Jack Frey got toss-up #14 about zombies, Patrick got #15 about the Battle of Saratoga, and the team collected all the bonus points to close the gap to 170-155. LASA powered the next question about Tokyo but could only convert 10 of the 30 bonus points to leave the score at 195-155 after tossup #16. Neither team was able to get tossup #17 or #18.

On toss-up #19 Patrick correctly identified Louisiana Governor Bobby Jindal and the team again swept all 30 bonus points to make the score 195-195 going to the final toss-up. Patrick came thru once again, correctly answering that Commodore Perry captained the USS Mississippi in an expedition that opened Japan to American trade. This toss-up sealed the victory for the Eagles and completed the biggest come-from-behind finish in recent memory. This was only the 3rd time in 24 matches that Savio has prevailed over a LASA team, and the first time at a varsity level event.

The 3-3 preliminary round record was respectable, but unfortunately the Eagles bonus conversation average on the day was not good. After setting a new school record at the last tournament, the Savio team found itself as the lowest ranked of four 3-3 teams. This gave the Eagles the #8 seed for the playoff round. They faced the #9 team from Strake Jesuit. It was another gut-wrenching nail biter, and in the end the Eagles came up just short by the score of 280-270. This meant the Eagles finished the event in ninth place. Freshman Matthew Meskill was the leading scorer for the team with 37.86 points per game (7 powers and 4 NEG5's).

The final tournament of 2015 will be the Houston Holiday Hoedown on December 12th at Seven Lakes High School in Katy. This is always a huge event and is expected to draw the best of the teams from Texas, which means that numerous teams with national rankings will be there. The Eagles plan to enter at least one team in the upper division of the tournament and would like to enter multiple teams in the lower division. In February the team will be sending a team to College Station to compete in a regional qualifier for the National Science Bowl. The team is looking for new players to round out the rosters for these events. Any Savio student interested should contact Coach John Isakson at jisakson@earthlink.net.