The fifth match of the day pitted the Eagles against a familiar foe, San Antonio Brandeis. Savio had easily whipped Brandeis in two tournaments early in the year. But more recently Brandeis had beaten Savio in the History Bowl and the Bluebonnet Bowl. The Eagles got their revenge, handing Brandeis their first loss of the day 360-220. As the only unbeaten team at this point in the day the Eagles were feeling good, comfortably sitting in the #1 position in group B. In the afternoon session the Eagles played matches against the top three teams from group A. In the first of the three matches they completely demolished the team from Carnegie Vanguard by a score of 400-115.

In the next match they met up with Katy Taylor High School, who was the experts' pick to win the tournament. They proved worthy of their reputation as they put the Eagles on their heels early. But undisciplined play cost the Taylor team dearly. They committed a total of six NEG5's in the match including four in a row on tossups 3 thru 6. This allowed the Eagles to overcome an early lead by Taylor and surge ahead 80-30 heading into tossup #8. But Taylor fought back, and at the half Savio held a slim 115-95 lead. Taylor rallied back and took a 175-115 lead heading into tossup #14. Taylor's next two NEG5's enabled Savio to pull into a 165-165 tie heading into tossup #16. Going into the final toss-up Taylor led 185-165. On the last tossup Patrick Lahey recognized Yulia Tymoshenko as the prime minister of Ukraine and buzzed to claim 10 points plus a bonus opportunity. The team correctly answered "Bitcoin" on the first part of the bonus as the digital currency recently criticized in the news. The Eagles missed the second part of the bonus, but Patrick came thru on the last part, answering that "Ponzi scheme" was the term being applied to Bitcoin by its critics. Final score Savio 195, Taylor 185.

This was Taylor's third loss of the day, which ended their chance to make the finals. The Eagle's were 7-0 at this point but were yet to meet the #1 team from group A. They faced that team, St. Thomas Catholic, in the 8th match of the day. It was a tough one for the Eagles as they struggled to match the buzzer speed of the St. Thomas team. In the end the Eagles were handed their first loss by a score of 245-215. However, as the only team with just one loss the Eagles advanced to the championship round!

Two teams each had two losses, St. Thomas and Carnegie Vanguard. These two teams played a tie-breaker match, which was won by Carnegie, putting them into the final series with the Eagles. The Carnegie team bore no resemblence to the team that Savio had beaten easily in the first match after lunch. They were the same kids, but the quality of their play was significantly higher. They put up a very strong fight and in the end prevailed over the Eagles in two straight games, 245-165 and 300-210. Despite their disappointment at not claiming the first place plaque, the Eagles players and all friends and family present were extremely proud of their performance for the day. Second place in the Division II State Tournament is a huge accomplishment for our young program. 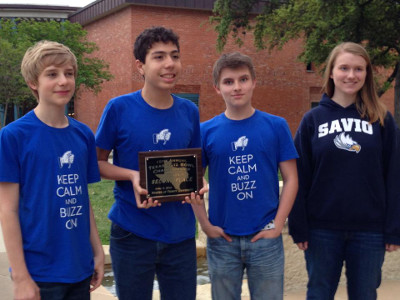 The team's focus will now shift to the National Academic Championship in Chicago on the first weekend in June. But it will not be just these four players making the trip. George Hinkel, Nicholas Isakson, and Calvin Nazareth will make up the roster for a second squad of Eagles competing in this event. In the remaining weeks before the tournament they will re-train themselves to play a slightly different style of game which is used at this event.